1. Literary scholar, Alastair Fowler, in particular, has published widely on the use of Cabbala in the structural patterns of Elizabethan poetry.

3. The Conference of the Birds is a fable of the journey to self-knowledge. It was composed in the twelfth century by Farud Ud-Din Attar and is a classic of Sufi literature.

4. I explore the alchemical framework and purpose of Cave Birds, Remains of Elmet and River in detail in my book Ted Hughes: The Poetic Quest, UNE Press, Australia, 1994.

5. The distinguished Jewish Scholar, Gershom Scholem, explains that ‘Yod he vav he’ (the four letters of the name of God) have, in Hebrew gematria, the numerical value 45, as does the word ‘Adam’. Scholem, On Kabbalah and its Symbolism, Schocken Books, N.Y. 1965. p.104.

7. Scigaj, L. The Poetry of Ted Hughes, University of Iowa Press, 1986, pp.279-286. Sagar, K. The Laughter of Foxes, Liverpool University Press, 2000. pp.136-7. Robinson, C. Ted Hughes as Shepherd of Being, MacMillan, 1989, pp.181-195. Scigaj does recognize the Cabbalistic symbolism of Baskin’s snake on the cover of Faber’s edition of Moortown and he links this with Adam but he does not follow this up in detail in his discussion of the poems, choosing, rather, to emphasize Blakean parallels.

8. Note in The Rainbow Press edition of Adam and the Sacred Nine, and Ted’s introduction to the BBC Radio 3 reading of some of the poems, given on 17 May 1980.

16. Cabbalist and teacher, Warren Kenton (Z’ev ben Shimon Halevi), describes the Irin as a “Holy inner council”, “the Messengers” and “the watchers who never sleep”, and he allocates them to specific positions on the Cabbalistic Tree. A Kabbalistic Universe, Weiser Books, Boston, 1977, pp.59-60.

18. Later, when Ted was at the height of his creative powers, had a great depth of mystical and spiritual knowledge and had spent a lifetime training and developing his magical Will, he made full use of the four Worlds of the extended Tree, and all the subtle varied powers they present, to undertake the Cabbalistic journeys which are the foundation of Capriccio, Howls & Whispers and Birthday Letters.

23. It is interesting to see these poems in terms of Ted’s lifelong interest in ecology and his view of the essential role we all must play in re-establishing and maintaining the balance of Nature.

38. The theme of Leonard Cohen song, ‘Anthem’, relies on general awareness of the continual sacrifices the dove makes for us. The song offers a Buddhist koan as a suggestion of hope against the ills of this world in which the Holy Dove is continually bought and sold and “is never free”. I’m Your Man , Lionsgate CD. Recorded 2004-5.

39. In the Christian Church, violet vestments are worn at Advent and on Ash Wednesday during Lent.

40. Sagar notes that “doves are unique in being the only birds to feed their young on milk, a high protein fluid called ‘crop-milk”. The Laughter of Foxes, Liverpool University Press, 2000. p. 92. 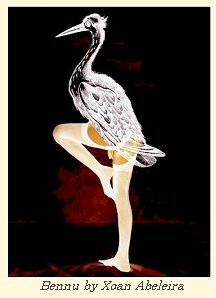 44. Xoan Abeleira, a Spanish artist/poet whose translations of a selection of Ted Hughes’ poems, El azor en el paramo, were published by Bartleby Editores in March 2010, has created beautifully evocative pictures of the Bennu Bird. He sent these to me, completely unaware that I was at the time writing about Ted’s Phoenix poem.

46. The cock-crows in this later poem herald an alchemical “kindling” of light in a dark world of Elmet, and they accumulate until they boil over in a fiery, “magic soft mixture” which momentarily recreates the whole land.

51. Tarot Cards are sometimes used by Cabbalists as a mnemonic device depicting the stages of the spiritual journey. The Beggar appears in the Mantegna Pack which dates from 1460, and it has been found in a few other early Tarot packs.