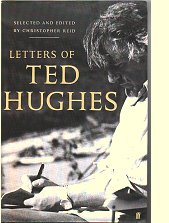 Writing a review after a number of major British newspapers and journals have already published theirs is an interesting exercise.

Interesting, not because everything seems already to have been said and all the best quotes to have already been used, but because of what other reviewers select from the many letters and from the great range of topics about which Ted wrote. He wrote to a huge range of people – family, friends, poets, editors, scholars, teachers, schoolchildren, theatre directors, politicians, royalty. As he got older and more famous, the pressures of answering correspondents grew: “I’ve spent most of this week simply writing letters.”, he told his aunt, “Even writing very briefly, they take me ages”. Still, he managed to write about many things, some serious, some trivial, some at great length, others with exemplary brevity. So, what reviewers choose to write about from this treasury reveals their own preoccupations.

Those reviewers who are intent on feeding the public’s seemingly insatiable curiosity about Ted’s relationship with Sylvia Plath begin with that and make the most of the three letters to Sylvia which are included in the book and the many references to her in other letters (a long list of which appears in the very useful Index of subjects). They look up Assia Wevill in the index, too (a shorter list). Then, it seems, they browse a bit further, add something from Ted’s letters to his children, Frieda and Nicholas, and note some of Ted’s comments about a few famous literary figures.

Ted’s detailed and extensive comments about many of his poems, his descriptions of his poetic methods, of mythology, and especially his discussions of Shakespeare and The Goddess of Complete Being, leave them baffled and terse: “a little goes a very long way”, one reviewer complained. Yet, these are the very letters which give the most insight into the thoughts and purposes behind Ted’s work, and they reflect the passions which drove him to be a poet in the first place. Yes, they are long and complex, and often they represent only one fragment of a long exchange of letters in which discussion and explanation flowed back and forth between Ted and his correspondent, but they are a fine example of Ted’s generous spirit and an important guide to his work and to aspects of his life which influenced that work.

There are many other far less serious letters to balance these lengthy flights. One which everyone can enjoy is Ted’s letter to Frieda describing his visit to Buckingham Palace in 1974 to collect his Gold Medal for Poetry from the Queen. The preliminary visit to the clothing store, Moss Bros., for a hired suit, was disconcerting: “[My waistcoat] was short. Between the bottom of the waistcoat & the top of the pants, I had three inches of white shirt puffing out. I could see I was going to spend my time in front of the Queen, surrounded as I imagined by lords and ladies, pulling my pants down to cover my socks, then pulling them up to cover that waist gap from below, & pulling my waistcoat down to hide it from above, and I thought I’ll look like a right hick”. When he mentioned that he would be meeting the Queen in an hour’s time, however, a more dignified-looking outfit was immediately found for him. The rest of the letter is similarly graphic and funny – a wonderful picture of the whole visit painted for his school-age daughter.

Christopher Reid, the editor of this book, has done an excellent job in selecting letters from the hundreds which were made available to him. It can’t have been easy to decide what to include and what to leave out, but he had complete editorial freedom in this matter. Nevertheless, he is well aware that some aspects of Ted’s interests have not been well represented. One reviewer, Ed Douglas, chose to fill in some of the gaps that Reid was obliged to leave in the interest of keeping the book a manageable size. Douglas, as a fisherman friend of Ted’s, is well situated to write about Ted’s little-known work as an environmental activist. ‘Portrait of a poet as eco-warrior’ (The Observer, Sunday November 4, 2007) is a fascinating and informed supplement to Ted’s letters.

Poet, Craig Raine’s review in The Times Literary Supplement, (Nov. 21, 2007) , on the other hand, is a curiosity which would surely provide food for thought for any psychologist. Raine seems to be obsessed with combing the letters for hints about Ted’s sex life. He begins with a completely irrelevant reference to a sexually explicit self-portrait by Egon Schiele, then extrapolates from there, quoting selectively, to demonstrate that Ted left “a paper trail for posterity” which shows him to have “remained ‘untamed, undomesticated, unruly and animal’ ”. Ted’s astrological interests are dismissed with a sneer, and a few Birthday Letters poems are dismantled (questionably) for good measure. “It is easy to be censorious”, says Raine, but he goes ahead with his speculative accusations anyway. Strange, when Ted’s letters to him, when Raine was poetry editor at Faber & Faber, are friendly and generously appreciative of his work.

John Carey’s review in The Sunday Times, (Oct. 21, 2007) is perhaps the best, broadest and most objective of those recently published. Yet, for many years Ted and Carey were not on speaking terms with each other. The bad feeling began after an angry public exchange of letters over Carey’s review of Shakespeare and the Goddess of Complete Being, and was exacerbated when Carey’s signature appeared (amongst others) on a public letter concerning Sylvia Plath’s grave. Ted’s own description of the many problems Sylvia’s more radical fans had caused over her grave appears in two letters in this book. As does Ted’s last letter to Carey, seeking to heal the “misunderstanding” between them and written just a couple of weeks before he died.

Christopher Reid states quite plainly in his introduction that this book is not a biography in disguise”. Nevertheless, the chronological ordering of the letters and the incidental and, sometimes, specific biological content provide a far more vivid, truthful and very personal picture of Ted’s life than any biography could achieve. There is amazing variety in this book which contains not just letters but also photographs, and, for example, an astrological chart for Philip Larkin; another made for Sylvia Plath in 1956, with a note about the suicidal placing of Saturn (which, according to astrologer Neil Spencer shows that Ted was very good astrologer); a diagrammatic method of comparing “sensibility and temperament” in the work of various poets; and a sketch which Ted made of his Order of Merit medal for his Aunt Hilda, which is part of the last letter in the book. Reid’s note that Ted died nine days after writing this letter provides an appropriate but chilling ending.

For me, nothing can compare with the sense of Ted’s presence which I feel when looking at his handwritten letters. His strong energetic handwriting, his characteristic dashes, the occasional indecipherable word which has to be puzzled over, the odd spelling mistake and the inserted afterthoughts, all convey his character. A printed transcript on the white pages of a book loses that sense of energy and immediacy. Nevertheless, the letters collected in this book display a whole range of emotions, enthusiasms, interests, concerns and obsessions: there is warmth, humour, occasional bleakness, passion, love, dedication, pedagogical instruction, self-questioning, self-discipline and everything else which characterized the man himself. The letters span Ted’s life from his teenage years to his death, and they tell us a great deal about him. Above all, as John Carey rightly says, “No other English poet’s letters, not even Keats’s, unparalleled as they are, take us so intimately into the wellsprings of his own art”.

A series of extracts from letters included in Letters of Ted Hughes was published in the The Telegraph, (November 27 -29, 2007).

© Ann Skea 2007. For permission to quote any part of this document contact Dr Ann Skea at ann@skea.com