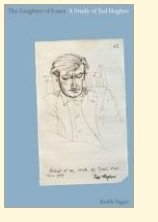 This is not, nor can it be, a critical review, since my own extensive study of Ted Hughes’ work leaves me very much in agreement with Keith Sagar’s interpretation of Hughes’s imaginative purpose, methods and achievement. Also, at the front of the book Sagar has included my own detailed Timeline of Ted Hughes’s life and work.

Keith Sagar is unique amongst scholarly critics of Ted Hughes’ work. Hughes regarded him as a friend and they met and corresponded with each other for more than twenty years. Hughes also valued his judgment to the extent that he reinstated some dropped Cave Birds poems in the sequence at his instigation and, much later, used him as a sort of “devil’s advocate” (Hughes’ words) to refine the theory which lies at the heart of Shakespeare and the Goddess of Complete Being. The letters which they exchanged are now in the archives of the British Library.

Sagar was the first to see Hughes’s work as part of “the great tradition of Western Literature”. He was the first, too, to see how the underlying purpose of Hughes’ work reflected that of Blake and Lawrence and, in particular, Jungian concepts of the role of imagination in healing and individuation. And Sagar’s own books, The Art of Ted Hughes and The Achievement of Ted Hughes (which includes essays by other authors), are still the most readable, most widely used and most useful works of criticism, analysis and explanation for school and university students.

The Laughter of Foxes (first published in 2000 and now revised and updated) builds on this sturdy critical foundation and it is both broader in scope (covering the whole opus of poetry and plays) and deeper in its analysis of the underlying patterns which drove and shaped Hughes’ work.

Chapter 1, ‘The Mythic Imagination’, outlines Hughes’ abiding concern with the progressive and devastating alienation of Western Man from Nature. Hughes described this as our “exile” from nature, and he believed that it cuts us off from our own inner world as well as from the world around us. Sagar shows how Hughes’ quest for healing through the imaginative powers of myth and poetry shaped his writing; and how it led him ever deeper into the explorative use of powerful energies which other artists have called ‘duende’ and ‘mana’, or have dealt with through mythic and religious symbolism and ritual. “We can say of Hughes”, writes Sagar, “what Hughes said of Eliot, that every poem must be read, chronologically, as part of ‘the series which makes up the poet’s opus’. In The Laughter of Foxes, Sagar demonstrates very effectively how such a reading can be done, especially in Hughes’ plays, where his exploration of the Orphic myth of loss, search and redemption has universal meaning but also had particular meaning in Hughes’ life.

In Chapter 2, ‘From Prospero to Orpheus’, Sagar deals with the poetic relationship between Ted Hughes and Sylvia Plath. He outlines the way in which both were shaped by their “childhood landscape”. He examines their collaborative goals and working methods. And he looks at the way in which their shared lives influenced their work, and how Plath’s death changed Hughes’ perception of his own poetic purpose. An interesting aspect of this discussion is Sagar’s detailed account of the way in which Birthday Letters reflects Hughes’ altered view of his own role in fostering Plath’s greatest achievement, her Ariel poems: how the “birth of the new creative self” for Sylvia – which they had both regarded as justified “at almost any cost” – becomes, in these poems, an altogether “darker, more confused and doubtful, more fatalistic” process.

Chapter 3, ‘The Evolution of ‘The Dove Came’, is rather different to the other chapters. Here, Sagar challenges the way in which poetry is usually taught, suggesting that the common practice of “artificially detaching the poem from the poet, and from the creative process encourages the belief that, as milk comes from bottles, so poems come from books”, and it completely ignores “the complex and fascinating process by which they came into being and got into books”. His own approach, demonstrated on a poem he chose “almost at random” from Hughes’ opus, offers a superb example of how a poem can and should be read. Using successive manuscript drafts, Sagar illustrates the way in which the poem changed and evolved as Hughes strove for a language of utmost simplicity and truth. And his approach is very like Hughes’ own examination of the evolution of Sylvia Plath’s poem, ‘Sheep in Fog’, which is published in Winter Pollen (Hughes, Faber & Faber, 1988).

Chapter 4. ‘From World of Blood to World of Light’, charts the refining of Hughes’ poetic methods, from his early adoption of bloody Orphic ritual (which was spelled out in Gaudete but which appeared everywhere in the harsh realism of his depictions of nature) to his later, more sophisticated adoption of mythic, alchemical and cabbalistic rituals as frameworks for his poems. My own work on the Cabbalistic aspects of Birthday Letters and Howls & Whispers (.//THHome) shows just how deeply Hughes finally immersed himself in the World of Light, since Cabbala is essentially an ancient spiritual discipline which emphasizes the rescue and redemption of light from the darkness in our fallen world. Sagar’s analysis demonstrates Hughes’ lifelong progress towards such detailed and disciplined use of visual imagination and memory, and the beautiful simplicity of language he ultimately achieved.

Throughout The Laughter of Foxes, Sagar quotes extensively from Hughes’ poetry, plays and essays, and from the letters which he and Hughes exchanged. As an Appendix, he includes ‘The Story of Crow’. This is the mythic framework within which Hughes intended the Crow poems to exist, but which he never completed. It is brought together here from Hughes’ notes and from his introductions to readings of Crow poems. Crow, too, can be seen as one more step in Hughes’ struggle towards an understanding of the human psyche and towards healing our rift with Nature.

At the front of the book is a poem, ‘The Healer’ by Mark Hinchcliff, which beautifully conveys the influence which Ted Hughes and his work have had on individuals like Mark, on schoolchildren like those Mark teaches, and on all the budding writers who attend creative writing courses at Lumb Bank – one of several centres which Ted Hughes helped to establish in order to foster poetry. The Laughter of Foxes, with its realistic picture of the sort of dedication and hard work entailed in creating any serious work of art, is valuable reading for all such delvers into the world of imagination. It offers a perceptive, and often inspired, reading of some of Hughes’s most important work and with its informed and convincing account of Hughes’ life and work it is an essential and enlightening resource for scholars at any level.

Disclaimer: Although my Timeline of Ted Hughes’ life and work is published at the front of this book I have received no financial gain from its inclusion and will receive none from sales of the book.

© Ann Skea 2006. For permission to quote any part of this document contact Dr Ann Skea at ann@skea.com