“Do I need permission to reproduce the drawing of the Iron Man which is on your web page?”

Yes. Permission to reproduce anything on these ‘Notes and Queries’ pages, or on other pages on my Ted Hughes website, can be obtained from me (Dr Ann Skea) at ann@skea.com. Include the name ‘Ted Hughes’ in the header of the e-mail; and tell me the purpose for which you wish to reproduce my work.

“Where might I find things to supplement lessons on The Iron Man for primary school children. I would like to bring the story to life so that they will never forget it?” 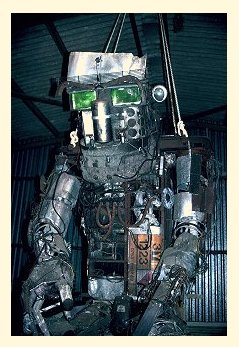 There was a full-page article in The Times, Section 3, Books, p.38 on Thursday, Dec.16 1999. It has pictures of the Iron Giant (from the film) and of The Iron Man (from the book) and a good review of the film. The Times has a website with archive material available at www.the-times.co.uk.

My own drawing of the Iron Man, which is on my Ted Hughes homepage, was made whilst I was staying at Moortown, the farm which belonged to Ted Hughes and his wife, Carol. Walking past the big empty barn close to the gates on my first morning there, I noticed something large hanging up in the middle of the dark barn. I went to investigate, and found the Iron Man seated on an old crate, supported by ropes from the roof, huge and dejected looking in the gloom. He was made from old pieces of car-radiator, headlamps, bits of refrigerators, wires and other scrap. 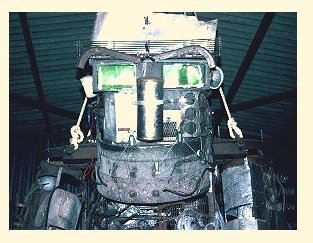 When I asked Ted about him, he told me that this Iron Man had been made for the stage musical which Pete Townshend wrote from the story. The music is, I believe, available on CD. One song, ‘A Friend is a Friend’. together with imaginative images from the story, is available on ‘https://www.youtube.com/watch?v=LpiYXRt5MyM’.

Ted also described the musical in an amusing letter to his son, Nicholas,(THL 9 Jan. 1994).

At present, the Iron Man can be found stepping into a courtyard at Newcastle Arts Centre , where in the spring the doves nest in him and at Christmas he is illuminated and his eyes light up. 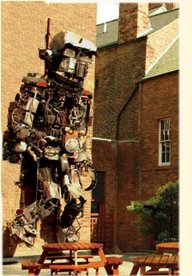 Frieda Hughes (Ted’s daughter) has said that Ted had told her and her brother Nicholas the Iron Man story at bedtimes, in instalments. Later he began a story about a rubber man, but that never got finished. The rubber man is still bouncing around somewhere waiting for his story to be told.

The film, The Iron Giant, is really nothing like The Iron Man except in spirit, but I think Ted would have enjoyed it and children love it. Ted said he was asked to be a consultant for the film but decided not to, and a friend had told him that the finished script was nothing like his book. He died before the film was launched.

Don’t forget about The Iron Woman : girls need a role-model, too.

“I have to discuss the symbolism, the literary content and the author’s purpose in The Iron Man. Can you suggest some background reading?”

There are two essays, both entitled ‘Myth and Education’ which are important background reading for understanding Ted’s thoughts about stories. Most of one is reprinted in Winter Pollen (WP 136-152). The original publication details of both are as follows:

Probably the most important view expressed by Hughes in these essays was his view that modern, ‘scientific’ explanation stresses objective analysis and facts at the expense of subjective feelings, imagination and intuition, and that both, in fact, are equally necessary. Without imagination, we can look dispassionately at photographs of horrific events, for example. He wrote of the need to stimulate the imagination and of the way in which stories, and particularly myths, do this. He wrote, too, of the way we internalize the themes of well-known traditional stories (those stories which deal in some way with the world and our place in it, our outer and inner worlds, the horrors we might need to deal with in life, the eternal questions about life and death) so that a single word has enormous ramifications of meaning for us. The word ‘crucified’, for example, might conjure up all kinds of associated stories. (I am paraphrasing and interpreting very broadly here). In his work, Hughes used words, symbols and images to stir the senses and to activate the imagination. The Iron Man is an imaginative myth for our times.

An article about The Iron Man, by Blake Morrison, appeared in The Independent on Sunday, Sept. 5, 1993, pp.32-34. In it, Morrison quotes Hughes as saying that he invented The Iron Man as a story for his own small children, and that he later wrote it out just as he had told it over three or four nights. He described the story as “like a kit or blueprint for putting together a little boy”, and he said that he felt he should tell his children stories to make things possible for them; stories that allowed them to win. He described The Iron Man as bringing the boy into a friendly relationship with the mysterious world of technology and machines in such a way that he can control it. And, in the “creature from space”, he said, “you have the terrible, possibly demonic world of what comes up from inside, out of the elements” and the boy and the Iron Man are “brought into a workable relationship with that, too.” So, this terrible space-being becomes their servant.

Hughes went on to tell Blake Morrison that he always felt the need to provide the same sort of story for a girl and that children would write to him saying “What about the Iron Woman?”. So, he eventually wrote The Iron Woman, too, although parts of it, he said, scared him so much that he had to abandon it for a while.

“Why did Ted Hughes choose the name ‘Hogarth’ for the little boy in The Iron Man?”

I don’t know why Ted Hughes chose this name and I have never seen it discussed anywhere.

Ted may have been thinking (consciously or unconsciously) of the artist William Hogarth (1697-1764), who created some very well-known caricatures of social and political evils of his time. The Iron Man is, after all, set in our own world, which is full of our own dangerous technological inventions, machines and pollution.

On the other hand, Ted was never casual about words, since he believed very strongly that words have great magical power. So, it is possible that when he came to write down this story (which he had told as a bedtime story to his own children) he chose the name Hogarth for his hero very carefully, with special attention to the sounds and the vibrations which are made when the syllables of the name are spoken.

For example: in some common magical and religious beliefs the ‘AH’ sound is the sound of breathing out, and is associated with the breath of life and with deities, spirit and love. The ‘OH’ or ‘HO’ sound is also the sound of breath, and of life, wonder, discovery, and inner strength. Both sounds, when breathed out, as they would be in saying the name ‘Hogarth’, come from the solar plexus in the body and, so, are associated with the Sun, which gives us life. This may seem very strange, but Ted knew that at one time such beliefs were an important part of religious practices and were used, for example, in hymns and chants and ritual prayers.

In any case, Hogarth is a great name for a hero: full of strength and energy.

The Iron Man Musical was adapted from Ted Hughes’ story by Director, David Thacker, and rock-guitarist Pete Townshend. It was produced at the Young Vic Theatre in November 1993. The set for this production was created by Shelagh Keegan.

Asked how the Iron Man moved on the stage, David Thacker responded “Didn’t you know that the Iron Man is real? He just gets up and walks every time he feels hungry”. He was, however, assisted by an actor who sang inside him and came out and sang on the stage.

After seeing a performance, Ted Hughes wrote to his son, Nicholas, that the set was “magnificent” - a complete scrap-metal yard in which the Iron Man was completely camouflaged until he suddenly emerged “with a great crash… The best moment”.

David Thacker remembers that the show was “wonderful. Not appreciated by the critics but hugely enjoyed by the audiences”. Ted described it as “a successful flop”, which all the kids loved and which was booked up for weeks ahead. (Letter to Nicholas Hughes, 9 January 1994, Letters of Ted Hughes, edited by Christopher Reid, Faber, 2007, pp.655-7).

© Ann Skea 2008. For permission to quote any part of this document contact Dr Ann Skea at ann@skea.com


Return to Notes and Queries