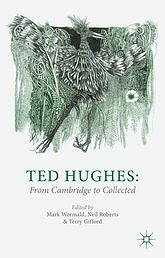 Ted Hughes: From Cambridge to Collected.


Extract from the Introduction by Terry Gifford.

Ted Hughes: From Cambridge to Collected, which takes its title and its genesis from a conference at Pembroke College, Cambridge in September 2010, engages with some of the questions, contradictions and riddles in the subsequent magnetic work of a former Pembroke student who exposed his imagination to the ‘spirit life and the magnetic field of earth’ [full quotation and reference earlier in the Introduction].

Perhaps the first riddle to be confronted here is that Cambridge seemed to have killed Hughes’ poetic muse, but was the making of him as a poet. In his chapter examining some of the myths about Hughes at Cambridge, Neil Roberts reveals that Hughes lacked confidence in the quality of his student poetry and avoided being known as a poet. However, the famous dream of the burnt fox that interrupted the writing of Hughes’ weekly critical essay with the words ‘Stop this – you are destroying us’ (WP 9), demonstrated Hughes’ separation from the earth and ‘spirit life’, and a switch in his studies subsequently led to Hughes gaining the anthropologist’s understanding of the shamanic function of art: the poet healing himself.

Edward Hadley’s chapter here directly addresses the surprisingly overlooked detail of Hughes’s writing about illness and healing, evidencing Hughes’ tactful and moving achievement in which the dignity of agency is subtly bestowed upon the sufferer. On the other hand, Lynda Bundtzen argues that late in his life Hughes struggled to heal himself successfully through the poems of Capriccio. Challenging previous readings of this collection, Bundtzen indentifies a ‘traumatic repetition’ of mythic narratives that fatalistically trap Hughes in riddles of his own mythologizing.

Of course, in addition to significant references to Hughes’ major works, this book explores neglected aspects of Hughes’ major themes such as the role of animals, Christianity, fishing and farming in his work. Laura Webb suggests that much of Hughes’ early interest in the spirit lives of animals is actually connected to his preoccupation with the survivalist qualities evidenced in the First World War and the survivalist linguistic strategies of the Eastern European poets. ‘Art operating as medicine’, in Hughes’ words, is one outcome explored by Webb’s enquiry. Indeed, Hughes’ belief that poetry has become the secular healing substitute for organised religion was one reason Hughes gave to decline a debate with the Anglican Church in his letter to Bishop Ross Hook. David Troupes takes this as his starting point in an attempt to clarify Hughes’ relationship with Christianity, arguing that Hughes’ shamanism paradoxically colludes with the Christian tradition by appropriating its symbolic structures.

It is well–known that a religious practice of body and spirit with rejuvenating powers for Hughes was his deep commitment to the piscatorial art. Mark Wormald is the first practitioner of this art to research the fishing poems using the newly available fishing diaries and journals in the British Library. A new aspect to Hughes’ personality emerges from Wormald’s interviews and his informed readings of the poetry and the prose: playful, as with fellow conspirators, mischievous even, teasing and testing friends, generous with information, lost for words at times, and bonding with his son in a way that, like all of the above, is written deeply into in the poems.

The other non–verbal engagement with ‘the magnetic field of earth’ that ran through Hughes’ life in different ways was farming. David Whitley begins his chapter on ‘Hughes and Farming’ by quoting the contemporary American georgic poet Wendell Berry on farming as ‘a practice of religion, a rite. By farming we enact our fundamental connection with energy and matter.’ Contrasting Moortown Diary with the children’s book What Is The Truth?, Whitley’s deft discussion of the texts demonstrates the poet posing questions through a variety of voices that demand judgements on behalf of both adult and child readers. Giving wild and domestic animals agency, for example, requires a repositioning of animals by the reader in relation to their mythic archetypes. In these books, Whitley argues in his final paradox, ‘the farm becomes a space where animals can work inside humans with renewed energies’.

It seems remarkable that to date there have been no chapter–length studies of Hughes’ debt to three poets whose work fascinated him throughout much of his life: Emily Dickinson, Seamus Heaney and Federico García Lorca. The detailed scholarship of our three contributors on these poets produces some revealing insights and an unpublished poem. Gillian Groswezski weaves Hughes’ admiration for the enigmatic speech of Emily Dickinson around his relationship with Plath right up to and including Birthday Letters. Following the twisting riddles of intertextuality Groswezski even, at one point, shows Hughes to be correcting Plath’s misremembering of Dickinson.

Seamus Heaney has been eloquently generous in acknowledging his debt to Hughes, but Henry Hart asks what it is that separates the two poetic sensibilities. By declining to rigorously critique the forces of Puritanism and rationalism, Hart argues, Heaney ‘attempts to yoke the virtues of asceticism and rationality together with the virtues of sensuality and intuition’. Lorca, on the other hand, makes no such reconciliations. Yvonne Roddick charts Hughes’ passion for the work of Lorca from his first readings with a dictionary in Benidorm in 1956 to his 1996 translation of Blood Wedding. Along the way Roddick unearths an unfinished draft of a poem in the style of Lorca, probably from the late 1950s/early 1960s, that is published here for the first time. Roddick suggests that Lorca gave Hughes an ability to tune into the ‘inner music’ of poetry at its most magnetic.

Three chapters of this book deal with hitherto neglected poetic means of Hughes’ exploration and expression of ‘the magnetic field of earth’ in his poetry: the ‘inner music’ of his poetic rhythms; his use of the vacana form; and his richly powerful speaking voice.

David Sergeant, in a brilliantly detailed chapter on Hughes’ inner music, revises the popular view that Hughes’ verse is alliterative in its rhythmic structure by demonstrating that larger blocks of verse form Hughes’ rhythmic units in which unstressed syllables play a crucial part. Furthermore, Sergeant asks what all this means for a critical reading of the poetry and goes on to answer this question with contrasting examples.

Ann Skea has researched Hughes’ use of the Southern Indian poetic form of the vacana, a complete record of which exists in a single notebook. These poems constitute direct addresses to a goddess who represents the source of creation and are best known to readers of Hughes as the selection used as the Epilogue poems of Gaudete. Skea shows how juggling the demands of farming and writing whilst having accepted the shamanic challenge to pursue this visionary journey towards intimate knowledge of the goddess of creation, produce the frustrations and elations of the vacanas, which are actually an experiment in a restricted scale and mode that shadows the major poetic works. Skea’s account makes more accessible the strange voice and riddling tone of these enigmatic poems.

Perhaps one of the most electrifying readings ever heard from the voice of Hughes was that of a tape played at his memorial service in Westminster Abbey. The mature Hughes voice and the words of Shakespeare combined to catch the audience by surprise. Of course, this was one of an epic series of recordings made by Hughes in the last years of his life. Like everything he did, Hughes had evolved a carefully thought out approach to reading poetry that is explained for the first time here by Carrie Smith. Again, Smith’s research elucidates important examples to convey something of the healing effect of a nervous system exposed to spirit life embodied in a voice that appears to be speaking directly from ‘the magnetic field of earth with all its riddles’.

Seamus Heaney had kindly agreed to read at our conference at Pembroke College, but was prevented from doing so by illness at the last minute, so Simon Armitage generously offered to take the field as a West Yorkshire super-sub, at which news the organisers ‘bicycled in air’. It is even rumoured that one of us ‘flew horizontal’ like the goalie in the poem ‘Football at Slack’. So it is fitting that this volume is begun and ended by unpublished essays by two poets who have each spoken much about the influence upon them of Ted Hughes’ friendship and work.

We are grateful to Simon Armitage and Seamus Heaney for permission to publish here talks originally commissioned by Carol Hughes and the Dartington Ways With Words Festival in July 2003 and July 2007 respectively. Simon Armitage develops a theory that he calls ‘The Ascent of Ted Hughes’ as he reads poems that literally arise out of the Calder Valley ‘to stand respectfully,’ as he quotes Hughes saying, ‘hat in hand, before this Creation, exceedingly alert for a new word’. And to conclude this book Seamus Heaney has offered us a moving meditation upon ‘Suffering and Decision’, Hughes’ own words for what makes poetry distinctive. Heaney’s magisterial essay makes the strongest claim for the healing potential of Hughes’ poetry by possessing what Heaney calls ‘an inner ethic of endurance’.

‘Introduction’© Terry Gifford 2013. Reproduced with the permission of Palgrave Macmillan.